The show included three live broadcasts – two Semi-finals on May 25 and 27 and the Finals on May 29 to a combined live audience of over 50,000 and an estimated 200 million television and internet viewers.

Production Manager of Design Ola Melzig said, “There’s a very good reason that W-DMX is used for Eurovision – it works. You name it and it’s at Eurovision: every kind of wireless and broadcast equipment, moving sets, thousands of fixtures and thousands of people. Wireless DMX is required for some aspect every year and we just won’t take a chance with any brand that W-DMX from Wireless Solution.”

The show was televised by host broadcaster NRK and held at Telenor Arena located just outside the capital of Oslo. This year hosted 39 countries and 3 interval acts, including the world’s largest flash mob dance. Jon Ola Sand was Executive Producer working together with TV Producer Hasse Lindmo. PRG of UK and Germany provided all technical equipment and crew for the show with support from Norwegian supplier Frontlite.

Niclas Arvidsson, CEO of Wireless Solution said, “We have always been very proud to be part of the Eurovision Song Contest. It’s regarded as one of the most technically advanced productions around today.” 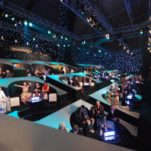 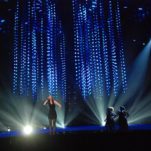