The Palace of Culture and Science (Polish: Pałac Kultury i Nauki, also abbreviated PKiN) in Warsaw is the tallest building in Poland. Construction started in 1952 and lasted until 1955 and was a gift from the Soviet Union to the people of Poland. The 231 metre-tall building currently serves as an exhibition hall and office complex and as a radio and television broadcasting centre, also hosting cinemas, theatres, museums, and conference hall for up to 3,000 people.

The highlight of the Palace of Culture for tourists is undoubtedly its observation deck on the 30th floor, from which the whole city can be viewed on a clear day. In order to revive the city skyline with a brush of lively colours, a challenging lighting project was developed with the EC financial support. The central tower of the building, which was previously illuminated with a white light discharge lamp system, is now completely lit up in colours in order to offer a more modern and dynamic lighting concept to tourists and visitors

The huge lighting project was divided into two main parts, the first of which concentrated on the illumination of the central tower of the building was successfully completed in February 2011. The lighting concept was developed according to the guidelines received by the company in charge of the lighting installation. When it came to selecting the ideal illumination system, which should be capable of reaching the, the choice fell on Griven Powershine RGBW was chosen to illuminate the 168 metres of the main tower building.

Additional Powershine D RGB+W units were also installed on the decks of the 4 lower turrets in order to floodlight the corners of the tower that were left uncoloured. In order to create a pleasantly unexpected light and colour contrast between the interior and exterior parts, 48 Danube 45° units were positioned within the windows of the main tower and of the four turrets.

To successfully reach all lighting equipment around the building, W-DMX by Wireless Solution was selected and supplied 4 pcs W-DMX WhiteBox F-1 and 14 pcs of WhiteBox R-512 together. Wireless Solution provided with on-site support with advanced cell planning to choice the right antenna solution to be able cover all 4 sides of the 168 meter high building. Griven have been a long term partner with several installation around the world, for example Abu Dhabi, Kuwait and now in Poland.

Lighting and W-DMX equipment was supplied by Prolight based in Warsaw. Radosław “Radi” Zacheja, Sales Director for Prolight said, “W-DMX made this installation possible. It’s been very reliable and allows designers to bring the beauty of lighting to situations like this.” 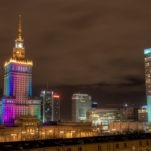 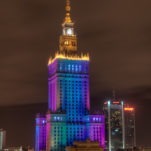 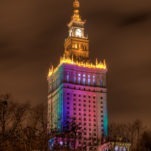 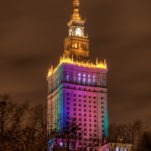 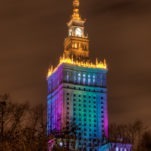 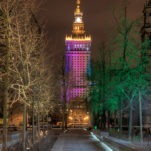