The project, aptly named “Ignite the Dream” was the creation of Partrick Roberge to be the signature show celebrating the end of each day of the Olympic competition. Lighting Designer Robert Sondergaard of Electric Aura explains, “Patrick’s vision was that this show had to be one of the top 10 things to see during the Olympics.” The lighting, as well as all of the special effects, were designed to create a stunning 360-degree experience that would showcase British Columbia at its best. The show was produced by Partrick Roberge Productions, with lighting design by Electric Aura Projects, and lighting gear supplied by Christie Lites and Epic Production Technologies.

Sondergaard explains, “One of the missions driving the design was placement of the towers housing the technical infrastructure. In general the site was quite large but we shared the space with tents, city parks and thousands of people. Once we had the technical space sorted out, we needed to find fixtures that would give us the biggest impact within a small footprint.”

As important as it was to have high-impact lighting, “green” products took high-priority for the project. The 2010 Olympic Committee encouraged environmentally-friendly choices for everything surrounding the Games from the very beginning.

W-DMX played an important role for two reasons. “We rigged ten Syncrolite SXB 7K fixtures on the tops of the buildings surrounding the site to get maximum attention,” explains Sondergaard. “Besides the logistics of running DMX cable to those locations – basically impossible – W-DMX is a very green product leaving zero carbon footprint. We also used numerous LED fixtures which allowed us to get a large number of fixtures that wouldn’t add significantly to our power draw.” Two Wireless Solution W-DMX transmitters and two receivers provided signal to all 10 Syncrolites on the rooftops. Control came from a grandMA Lite.

Covering a total distance of 1 city block (approximately 1000 feet or 300 meters) horizontal and about 10-11 stories up (approximately 100 feet or 30 meters) while in the presence of thousands of spectators, cell phones and broadcast equipment, the W-DMX never dropped the signal. “Rock solid as always,” said Sondergaard.

In addition to Ignite the Dream, W-DMX was also put into use at the Paralympic Games, as well as at Whistler and events downtown 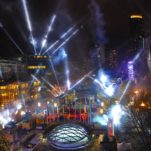 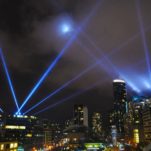