The Volkswagen Touareg has been a favorite among soccer moms and SUV fans since its introduction in 2002. At the premiere, Volkswagen unveiled the completely redeveloped Touareg, hailed as the most technically innovative "VW" since the brand has been in existence. The new Touareg is nearly 20 percent more fuel efficient and equipped with a large variety of new assistance and safety systems.

It will also be the first and only off-roader in Europe by a German manufacturer to be available in a hybrid version, bringing it worldwide attention for its Green initiative.

Lighting Designer Martin Kuhn pulled out all the stops for the event, which included colorful LED columns to compliment the Touareg and dazzle the audience. Production was supplied by Leyendecker GmbH of Wuppertal. Because of the location of the columns, no DMX cables could be run, so Kuhn turned to W-DMXTM by Wireless Solution.

W-DMXTM was used to provide DMX coverage to the columns, which were backlit with LED, as well as to the outdoor LED fixtures on the roof. A total of 8 feeds of wireless were used. Kuhn explains, "I chose W-DMX because of previous excellent experience during the opening of the Football World Cup 2006 (also in Munich) and because I needed 100% reliability in an environment with lots of radio microphones, wireless TV cameras and of course cell phones. We never once lost signal and had a very successful launch."

"I have to admit I was sad not to be able to attend the launch," said Lotta Schiefer, EMEA Sales Manager for Wireless Solution, "The Touareg launch was quite the buzz, plus Volkswagen is known worldwide for its high-profile reveals and the lighting and production values are some of the best in the world. We’re always proud to work with Martin and happy our product delivers him with perfection every time." 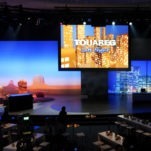 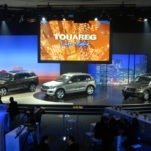 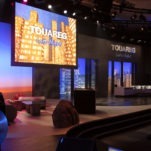