Laserworld AG, headquartered in Switzerland has subsidiaries in Shenzhen (China), in Manchester (UK) as well as in New York (USA) supported this event with a gigantic laser show setup on three stages – with an overall power of up to 200W. To create a stable, wireless connection between several peripheral systems, like smoke- and haze machines, Laserworld used the versatile W-DMXTM transceiver for control.

Norbert Stangl, Sales & Marketing Director for Laserworld explained, “We tried a ‘cheap’ wireless DMX box first, as one of the event companies had them in their truck, but it didn’t work, as it struggled with the electromagnetic noise and the distance (approximately 50 metres). We couldn’t get it connected properly. Fortunately, we had a backup solution with us – the W-DMX transceivers established the connection straight away, and they performed extremely well during the event with nearly a million people around and so much additional electromagnetic noise from the party trucks that passed by the main stage.”

Stangl adds, “The motto of the parade was “Dance for Freedom”. This appeal was conceived for personal freedom without conventions or pressures and with mutual tolerance and respect. The general feedback on the event was very positive – from organizers, artists and sponsors. So it’s even more to expect next year!”

Niclas Arvidsson, CEO of Wireless Solution says, “We were happy to work with Laserworld on this project – they do some very exciting projects. We appreciate when users of our technology experience the reliability and ease of use of our product, and it’s great to hear positive feedback and see what they have achieved.” 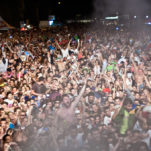 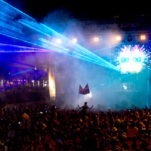 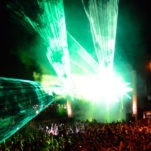