W-DMX™ on Vangelis Concert in Doha

W-DMX™ by Wireless Solution Sweden AB helped make the grand opening of the Katara Amphitheatre in Doha, Qatar a truly illuminated evening. The venue, the largest amphitheatre in the Middle East, played centre stage for a special concert by the Oscar-winning Greek composer Vangelis. A&O Technology implemented a spectacular light show by the late esteemed lighting architect Gert Hof for the special concert. A&O was responsible as general contractor for the lighting and pyrotechnics including the provision of electrical power, control and programming for the light show. Only ten days had been assigned to put together a multimedia show in which at times over 350 high-powered searchlights, a variety of lighting systems, fireworks and video projection were employed simultaneously. The central section of the giant screen erected on the seaward side of the amphitheatre formed a giant arch that opened to reveal not only the sailing vessels out in the Persian Gulf but also a giant barge armed with no fewer than 90 xenon searchlights to create a blazing island of light in the ocean.

W-DMX was used for two rows of 45 A&O FALCON xenon searchlights positioned on a barge just under 90 metres long and aimed towards the amphitheatre. The control of these devices was realized from a distance of 611 metres over three Universe systems with control from a grandMA control desk.

The light show accompanied Vangelis’s scores for Chariots of Fire and Conquest of Paradise for which Hof worked closely with Vangelis on the project. In addition to Vangelis, the spectacle included music from the Qatar Philharmonic Orchestra, the Yurlov Russian State Academic Choir, famed soprano Angela Gheorghiu and tenor Roberto Alagna, the Qatar Philharmonic Children’s Choir along with musicians from other countries playing traditional instruments.

“It’s very satisfying to see W-DMX OEM partners like A&O in such prestigious events,” comments Niclas Arvidsson, CEO of Wireless Solution, “A&O has some of the most stunning lighting available for large scale events like this – the photos say it all. We’re very proud that W-DMX is offered in this high calibre line of products.” 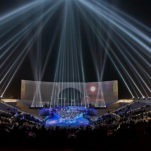