802.11a – released in 1999, this standard supported rates up to 54Mbps. It utilises 5 GHz only, a significantly less congested band (resulting in a lot less interference from other signals). The big disadvantage is the range, being less than what 2.4 GHz offers, as well as breaking barriers – these signals in 5GHz are more easily absorbed by walls and solid objects.

802.11b – released in 1999, same year than the previous. It was initially widely adopted as this version was a lot less expensive than the former, having been adopted by the consumer market. It is better in travelling to further distances and penetrating solid objects. However, it only supported up to 11Mbps.

Because water reacts better to 2.4 GHz, there is a disadvantage in using outdoor, as trees and leaves may disturb its transmission. For outdoor use, 802.11a is better than this version.

802.11g – released in 2003, it operates in 2.4 GHz but it has a higher throughput of 54Mbps, and still backwards compatible with previous versions.

802.11n – this was released in 2009 and designed with an increased throughput, utilising multiple antennas to increase data rate, now up to 600 Mbps. It uses both frequency bands 2.4 GHz and 5 GHz, with a superior indoor and outdoor coverage, essentially doubling the range of its predecessors.

This uses a new technology – MIMO – Multiple-input Multiple-Output; It’s a technique for sending and receiving more than one wireless signal on the same radio channel at the same time.

802.11ac – This is the most recent standard, adopted in 2014, supporting rates up to 1.3 Gbps. It only uses 5 GHz, but it carries MU-MIMO, an advanced form of the technology in the previous version. 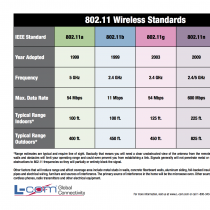 W-DMX™ – Our technology is not based on any of these Wi-Fi standards, but it’s relevant to mention the similarity in frequency range. We use the complete range of channels, but our technology is our own. In fact, because of the way we develop our software, our transmission can travel 10x the distance than the most flexible Wi-Fi standard (802.11n can travel circa 70m/225ft and W-DMX™ can travel 700m/23,000ft with line-of-sight).

When approaching a complex project in a heavy Wi-Fi environment, we recommend to find out which is the predominant standard, and use W-DMX™ devices in the less congested band – for example, if 802.11g is in operation, you should use W-DMX™ on 5.8 GHz.

There is a valid discussion to whether 2.4 GHz is better outdoors or indoors – you must consider the physical space outdoors, that might allow for a better spread in the air; or when indoors you might have more barriers and more devices to conflict with this band. You must consider all sorts of challenges when specifying to a complex installation.

It’s relevant to understand that Wi-Fi is based on wideband (with DSSS, commonly used to send big chunks of data) where W-DMX™ is based on narrowband and frequency hopping. Wideband is needed for a larger volume of data – our technology does not need this as DMX data rate is only 0,25Mbit/s. 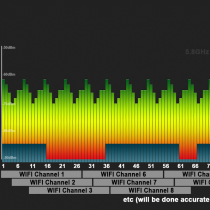 Because each Wi-Fi channel is 20MHz large, there only exist 11 channels in the 2.4 GHz spectrum – there is physically not space for more. Our technology however does not require such a large space – each channel of W-DMX™ is only 1MHz wide, allowing for 77 channels to be used at the same time (77 narrowband channels are equivalent to 11 Wi-Fi channels of DSSS). Moreover, common Wi-Fi allows for channel overlapping (except in channels 1, 6 and 11 are non-overlapping), whereas W-DMX™ is a non-overlapping system.

Adaptive Frequency Hopping is also very important to us, and something we actively implement and improve – in temporary applications, where there is very little time to survey, analyse or troubleshoot wireless networks, a system with a technology that adapts its radio transmission automatically depending on current radio traffic is needed – said system ensures that the transmission is conducted interference free. Our technology looks out for other wireless devices, avoiding overlapping with them, and jumping 1600 times per second on up to 77 narrow band channels within its frequency spectrum. The adaptive feature constantly scans for background noise (caused by other wireless networks) and, if a channel gets interference, it gets removed automatically – once this interference goes away, the channel automatically goes back to the hopping schedule.

Another great feature of W-DMX™ is our Data-Safe technology: in short terms, we send each DMX slot up to 4 times, in different radio packages, on different frequencies (or channels, one of those 77 we mentioned before). Each radio packet has integrity control – this means it will only be received if they are complete and consistent, so even if up to 3 data packages get corrupt (and therefore not received) we will still get the DMX information across the radio link. We also have a 192-bit encryption that acts like a defence mechanism, making sure that the data does not get altered – the original data coming in to the transmitter is the same than the one coming out of the receiver.

The other great benefit of W-DMX™ is Invisi-Wire: this is a technique to reproduce the timing information from the DMX controller. Since the DMX standard has a wide timing specification (there are several interesting articles on the web about this*) some fixtures may not work as well with certain consoles, even if they follow the right specification. Invisi-Wire reproduces the incoming timing when we resend the DMX data from the receiver. And even if the fixture does not work with all variations of the DMX timing specification, it will work wirelessly thanks to this technique.

MIMO (Multiple Input Multiple Output) – This is a method for multiplying the capacity of a radio link using multiple transmit and receive antennas, on the same radio channel at the same time, and explore multipath propagation. It increases link capacity and spectral efficiency combined with improved link reliability using what were previously seen as interference paths.

MU-MIMO (Multi-user MIMO) – it’s a set of MIMO technology in which a set of users of wireless terminals, each with one or more antennas, communicate with each other. It is a more advanced form of the previous technology, that can leverage multiple users as spatially distributed transmission resources. 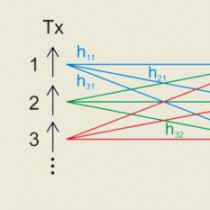