The Opening was a brilliant combination of dazzling light, music and dance, fireworks, and cultural extravaganza. It was an especially monumental ceremony, as the country just celebrated its 60th birthday. The ceremony used 2500 lighting fixtures and a 20,000-square-meter video screen (215,000 square feet), which beats the 2004 Athens Olympic Games opening ceremony and comes close to the Beijing Olympic Games.

«The W-DMX performed flawlessly as usual, even amidst thousands of spectators, cell phones, and broadcast equipment,» said Jiang Wei Kai of Golden Sea, «We have invested heavily in the brand due to its reliable and stable performance in the past on many high-profile events in China such as the Beijing Olympics. We also build it directly into many products to make projects easier for lighting designers.»

«China is one of the most exciting regions in the world for the lighting industry,» says Niclas Arvidsson, CEO of Wireless Solution, «We dedicate a lot of our time and resources to this region of the world and it definitely pays off. We’re very happy to see W-DMX in such high profile projects and we’re always so pleased to have satisfied clients.»

Look for W-DMX in upcoming events in China and beyond. The country is currently the number one purchaser of W-DMX PCB cards for OEM products. «This shows the fast-growing faith in our product and something we’re very proud of,» adds Arvidsson. 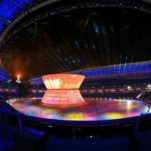