A sea of kinetic sculptures – 70 in total – were hung throughout the entire arena roof, resembling interior design lamps which would raise, lower and change color for the different performances. The sculptures were hung from custom fast moving winches designed by TAIT Technologies with the majority hung over the audience and 14 placed directly over the main stage

2 W-DMX BlackBox F-1 MKII units controlled W-DMX Micro OEM Transceivers (with support of RDM), utilizing four channels for an RGB+W LED located inside the fixtures and two channels for their speed and position. Although independently controllable, the sculptures as a whole were designed in unity, creating wave effects or lowering at the same time to give an intimate feel to the arena. Control came via GrandMA Light consoles. The W-DMX units come with the latest G4S software with Advance Adaptive Technology, making it ideal for a crowded wireless traffic spectrum.

Lighting Designer Fredrik Jönsson, said: “W-DMX was really the only way to pull off this effect. The signal was solid and reliable and set up was clean and fast – something very important on a show this size.”

Technical Director Ola Melzig agreed, saying, “Inside the arena, we had twice the amount of wireless traffic per cubic meter as Times Square in New York and the W-DMX worked flawlessly. It’s truly plug and play – hands down amazing. Both a cost effective and easy solution.”

Tait Technologies Assistant Project Manager Brandon Bogaert added, “The installation of the W-DMX was extremely easy and fast, making that task painless, which was very important when every minute counts.”

In addition to the kinetic sculptures, 50 Clay Paky Glow Up Strips located in the main lighting rig behind the stage were operated via OEM installed W-DMX, giving added flair to the main stage looks.

The 2013 show broke all previous television viewer records with over 170 million viewers worldwide, not counting internet views. In a show of this scale, nothing is left to chance.

Final results of the competition put Denmark as 2013 champion with the song “Only Teardrops” by Emmelie de Forest, putting the show in Denmark next year for the first time since 2001. 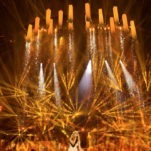 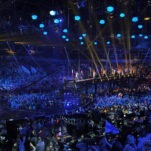 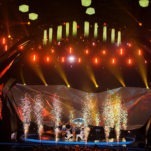 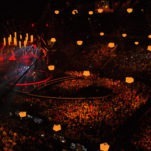