The film, which features a star-studded cast including Daniel Craig and Harrison Ford is about a spaceship that arrives in Arizona, 1873, to take over the Earth, starting with the Wild West region. A posse of cowboys and natives are all that stand in their way.

The Hollywood crew shot the Absolution town scenes on location in Santa Fe, New Mexico. The action packed sequences involved an old west town, full of cowboys, horses and wagons, being invaded by aliens in low-flying spacecrafts firing lasers at the town. Mike Bauman was the Chief Lighting Technician on the show, with Scott Barnes as programmer, using six universes of data. Five of the universes were run via 5 W-DMX Transmitters. See the dramatic filming sequence below.

Barnes said, “The total number of receivers was around seventeen.  We had three Alien speeder rigs that flew over the town. Each of those had a W-DMX receiver. Then we had twelve condors with lights, and each of those had a receiver. All the Spydercam rigs had two PRG Bad Boys and a Laser. One of them also had a Clay Paky Alpha Beam 1500. There were four Alien light condors that each had two Bad Boys and two Alpha Beam 1500s.  Then we also had eight condors that had two T8 Lumapanels, one Vari*Lite VL1000 TSD, and one Alpha Profile 1200.”

When it came to lighting the town buildings, Barnes explained, “The town was built with two main streets that intersect in the middle part of the town. Each of the four sections of the town had dimmers rigged inside the various buildings

Since there would be horses and wagons running through the dirt streets during filming, we could not connect each corner with regular DMX.  It would get trampled. So we used W-DMX for the dimmer universe too, and put receivers where needed. The Spydercam rigs that ran over the town were around 600 feet long and ran at around 45mph. All the transmitters for the rig were on the rooftop of one of the building in the center of town.”

Josh Thatcher was the media programmer for the movie, at the time working back in Los Angeles on Pirates of the Caribbean: On Stranger Tides (also using W-DMX.) “I’ve been using W-DMX on several major Hollywood movies for years,” said Thatcher, “It’s always been reliable and solves a lot of problems in challenging scenes.”

“This was a fantastic use of W-DMX,” says Niclas Arvidsson, CEO of Wireless Solution, “In addition to the very cool effect of the flying alien ships, the crew was able to solve the challenge of lighting the old west town without having cable running through dangerous traffic areas. If you haven’t seen the movie, it’s well worth your while. It was all very clever.” 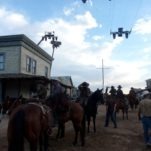 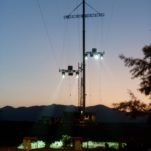 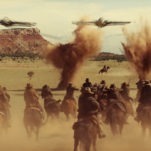