W-DMX™ by Wireless Solution Sweden delivered cheerful lighting to TeliaSonera’s Stockholm headquarters for the holiday season. TeliaSonera AB is Europe’s 5th largest telecom operator with operations in Northern, Eastern Europe, Central Asia and Spain, with a total of over 150 million mobile customers. The company headquarters are located at Stureplan in the center of Stockholm, one of the highest wireless traffic locations in the world. The design idea seemed simple enough: display lit Blachere snowflakes in the windows of the front of the building facing the main square downtown and put on a nightly light display every evening from mid-November through December 27. Ola Melzig of M & M Production Management was contracted by DDB Stockholm to come up with the design and logistics surrounding the concept.

The first idea was to hang the lighting on the exterior of the building below the windows on floors 2 through 6 for a total of 26 Blachere snowflakes. However, just one week prior to the install, the idea was cancelled due to commercial rights of the company owning the LED display wall and Versa tubes on the façade of the building. The company was concerned that the snowflakes would take focus away from their advertisements on the screen. So with just one week to go, Melzig and his team moved to plan B, hanging the snowflakes on the interior, which didn’t leave adequate time for an interior sight survey. Melzig said, «We had to believe, we’ll hang inside, drill here and there and add blackout curtains. What could possibly go wrong?»

The installation was scheduled for November 17 from 6pm to 4am, with the entire install to be completed in that time. A switch pack was placed on each floor with a grandMA Light placed on floor 3. W-DMX G4 F-1 Transceiver was on floor 3 and 4 W-DMX G4 receivers were located on each of the other floors to send signal to the snowflakes on those floors. Timo Kauristo programmed the grandMA Light using the calendar function to run the lights 5pm to 6am on weekdays and 3pm to 6am on weekends. The W-DMX equipment and grandMA were supplied by Starlight. The Blachere snowflakes were purchased by TeliaSonera. The design incorporated a variety of chases and different looks to keep the look dynamic.

When it came to floor 6, the managing director floor, there was an even tighter time constraint and required a constant security escort from the Swedish Security Police, SÄPO. The team have to get a signal working without interference as the W-DMX receiver was only 2 metres under the LED screen outside which was constantly running. In addition, security had installed scrambling devices due to the high level of security on that floor. Melzig with his team made a scan of the area to find the best working spot, where the signal managed to go through 4 concrete walls with no interruption.

Ola Melzig explained, «I’ve been a fan of W-DMX since day one, using it on a large variety of shows from Eurovision to Nobel, but never with the challenges we had here working under the worst conditions and the W-DMX still worked flawlessly. I wouldn’t have trusted this to any other brand.» 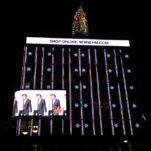 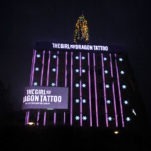